I'm absolutely in love with Dior's Summer 2021 Men's Fashion collection. Part of it's the lovely palette, so I've collected some of my favorites to share! 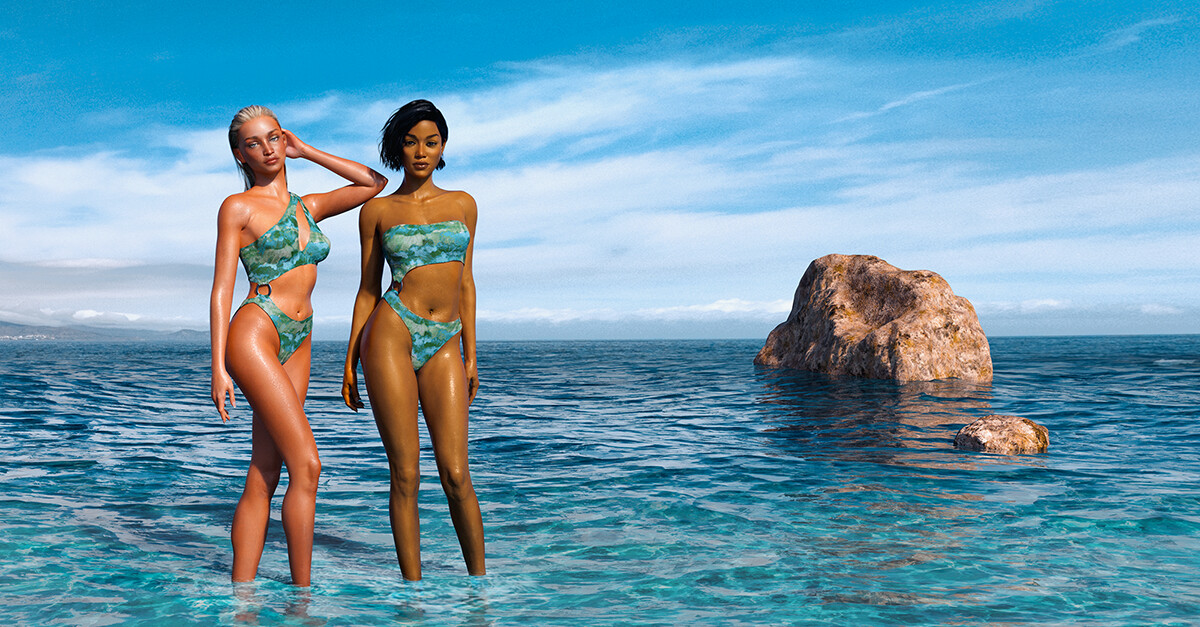 Excited to be nominated and then voted Artist of the Month at Renderosity; the announcement is here, and a short interview is here.

Also, as COVID-19 has been impacting things like real-life photo shoots, some fashion brands have turned to 3D models to show off their wares. I worked with elise x elisia and miracreativenyc to bring their resort wear vision to virtual life; their site is now displaying some of my editorials and e-commerce images, with more to come in the following weeks. 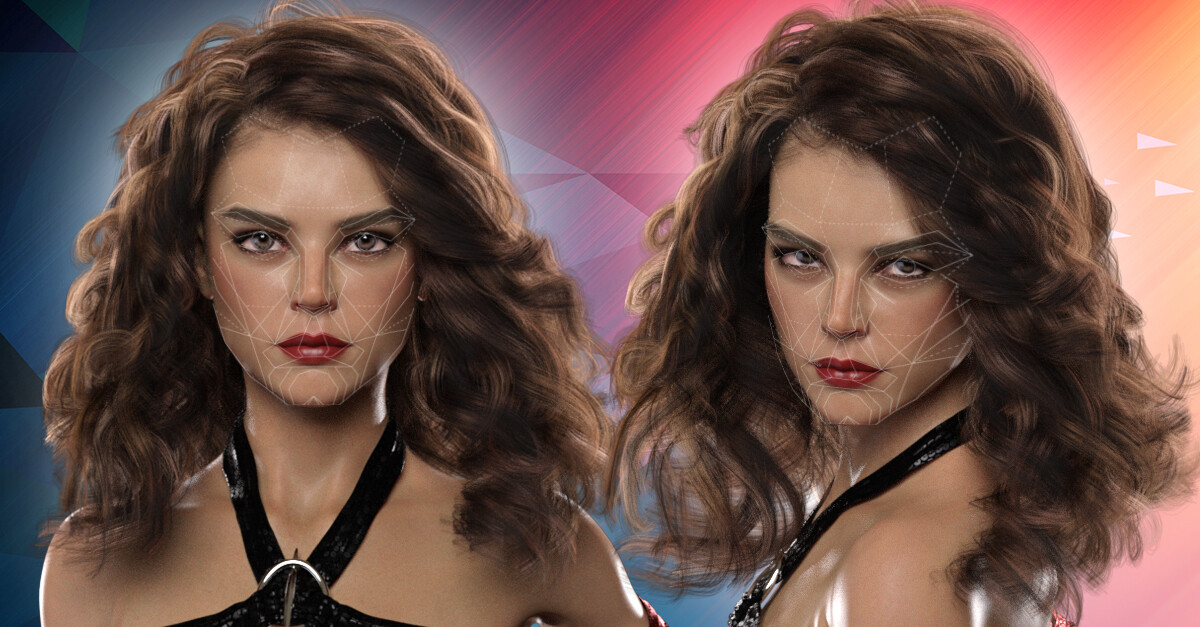 Dr. De Silva discusses his methods here (note: this is a podcast; if you want something written, see the methods of a biostatistics professor, Kendra Schmid, here). Basically, they employ the Golden Ratio to facial proportions.

Do I buy this? Not. so. much. I can buy that someone whose face follows the Golden Ratio may be considered attractive (also unproven), but most attractive? And on top of it, use this to rank women? (As of 2020, Dr. De Silva ranks men as well, with Robert Pattinson topping the list.)

As to Dr. De Silva's rankings, he certainly has not published any details beyond the list of winners and their close-to-perfection percentage. In particular, he has not published a list of celebrities whose faces were examined. Presumably, he only considered attractive celebrities to begin with, and I suspect not that many of them. Since he has published his list twice now, once in 2016 and once in 2019, I thought it was interesting to observe who made the list each time.

As of 2019, Kim Kardashian and Kendall Jenner no longer warrant mentions in the Top 10, despite Cara Delevigne's score being "lower" than theirs.  Or maybe their faces/scores changed. It's certainly possible, since Emily Ratajkowski's and Scarlett Johansson's scores went up in the intervening three years. Or it could be that he used different photographs.

Selection-wise, who knows, all of this could be "political." In other words, which celebrity mentions might bring the most eyeballs on social media or sell magazines, which celebrity mentions might suggest more legitimacy among a different demographic (Monroe), which celebrities agreed to cross-promote ahead of time (definitely not Monroe), etc. Some Instagram commenters complained that Dr. De Silva included people who have undergone facial plastic surgery, although that's really the point of the rankings--to sell his plastic surgery services so that you, too, can become more beautiful!

In light of the 2019 list, the 2016 list is also highly suspect in its blatant omissions. No Beyoncé? No Taylor Swift? No Natalie Portman? No Katy Perry? All of these women were very famous even in 2016, yet they were not "measured" until 2019? Who even are the candidates?

I read some criticism of the 2016 list that few WOCs were included; lo and behold, in 2019, Beyoncé is ranked second, though we still have no idea if more WOCs were included this latest round. If there were not, then there's an inherent bias here. If there were and many did not make the list, it would suggest that the Golden Ratio is a very Westernized idea of beauty, if it can represent beauty at all.

I thought I'd try to replicate the calculations starting with Bella Hadid, but I immediately ran into some problems. In most of her photographs, she has a preferred facial pose: chin down, looking up, ever so slightly but enough to potentially skew any ratios. Then, admittedly, I just gave up because I realized I don't buy into this anyway.

Side Quest: The Average Male Model Face (and Chest) 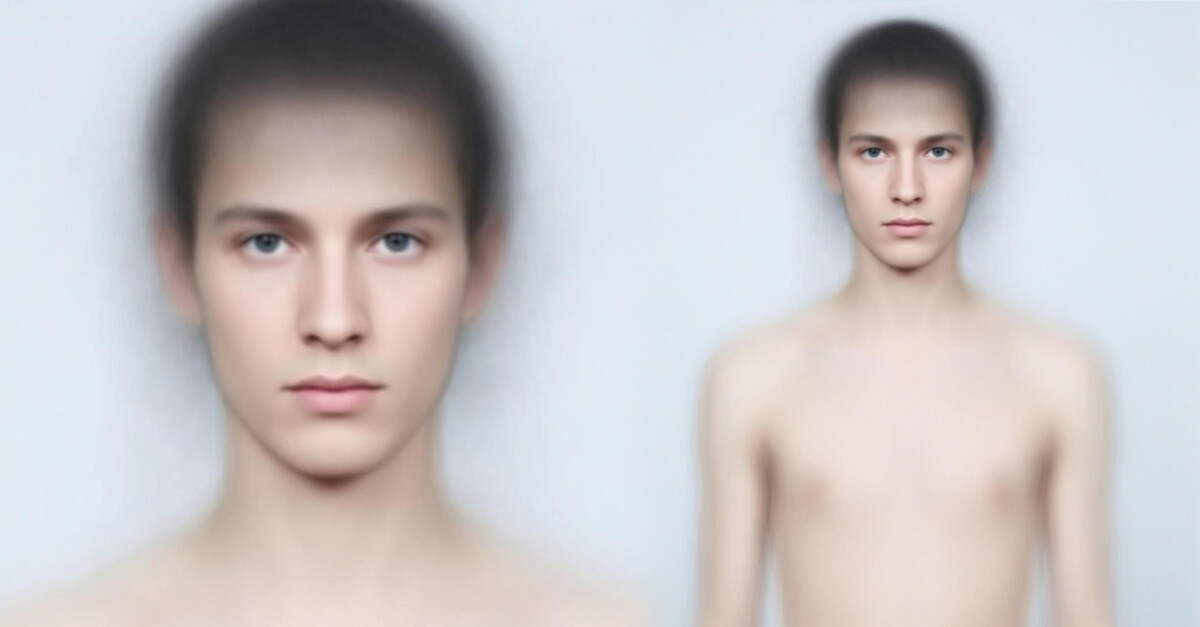 As a follow up to my experiment yesterday with female models from the Miu Miu Fall/Winter 2020 runway show, I decided to run some male models through LoveChild as well.

Instead of using a runway show, I used the model polaroids from the Tomorrow Is Another Day (TIAD) modeling agency site. I chose them because they take consistent photographs from the same angles of all their models. There's also a decent sample size; here, I averaged 207 male models.

As I mentioned before, since LoveChild can average only two photos at once, it's a process to get to all 207 models (and some had to be used twice to make it work). With Miu Miu's 66 runway models, the averages started looking much similar much earlier in the process. The male models at TIAD seem to have more facial variety/differences such that only at the very, very end did the averages start looking very similar.

Is this what you would have expected their average male model to look like? Knowing TIAD's taste in men, it's not too surprising to me.

Side Quest: The Average Model Face 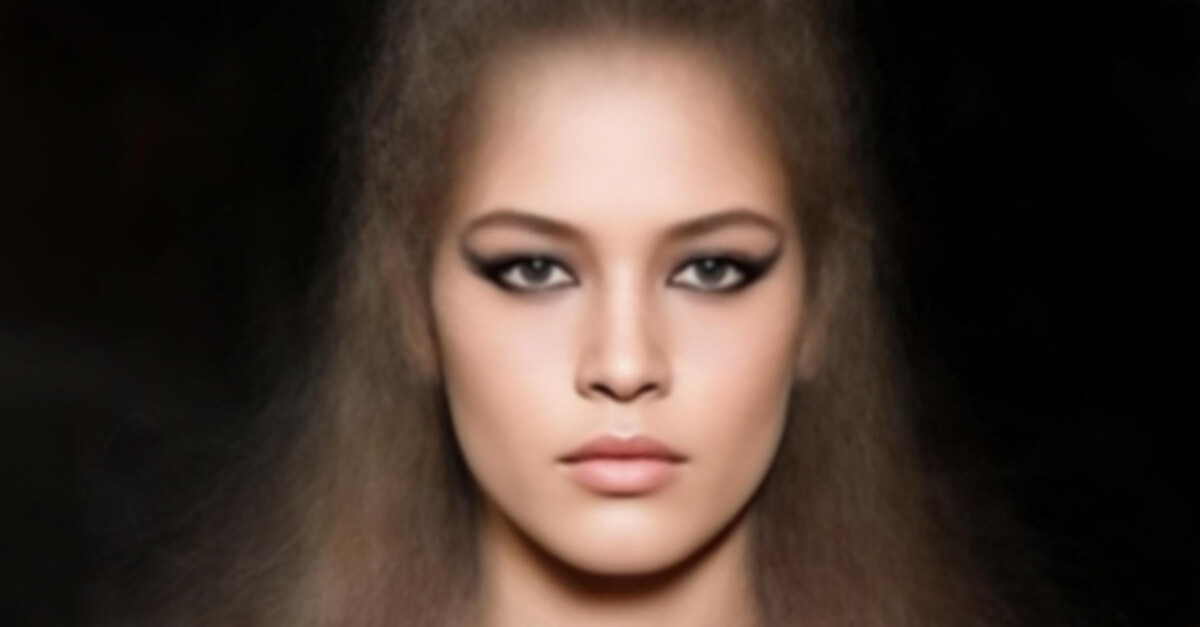 During an earlier flash sale, I grabbed the LoveChild software at a steep discount. It's a photo morphing software that is meant for facial portraits. Its advertised use is for you to combine two portraits to create a new "person" that you can use to generate 3D faces with the developer's other software (which I do not own).

As part of my workflow for creating characters, I definitely prefer to pick and choose features that I want. And "averaging" people tends to make them less distinctive. But I love playing around with software, experimenting, and having fun.

So what happens when you average a gaggle of models who are attractive to begin with? I chose to experiment with photographs from Miu Miu's Fall/Winter 2020 runway show, since I'd have fairly consistent lighting and a fairly large sample of models (66 with no repeats--well, I didn't fully verify this, but neither Bella nor Gigi Hadid walked twice, and those two tend to be the most likely suspects). Of course, since LoveChild only processes two photographs at a time, as opposed to averaging out the entire set all at once, a few photos would have to be weighted higher/lower. That turned out not to matter much, though, because by the time I whittled this down to a few photographs, they were all looking pretty similar anyway.

The result? See above. What do you think? Is it close to what you would have expected?

Some notes on using LoveChild:

Some thoughts on further experimentation: